(Note: this post is dedicated to Jackson Palmer, who finally got sufficiently sick of the BS in the crypto space that today he up and quit. Honorable mention to Ben Doernberg.)

Blockchains are easy. They’re databases. The “crypto evangelists” are confusing everyone by conflating the commercial and governance relevance of the technology with unnecessary political baggage.

Just go here for clarity. Then go here to see how you can harness the power of blockchains and smart contracts for yourself, today, without paying anything to anyone.

What drives me crazy are the people who pump it (and other “coins”) without understanding how the damn things work – either technically or commercially (or both).

You know the type. The kind of person who flits from conference to conference, trying to make decent, hard-working, highly-qualified professional folks feel stupid by peppering them with quasi-religious technobabble explaining how [insert cryptocurrency name here] is a paradigm-revolution-earthshattering-Olympian-[fill-in-the-blank].

…bullshit. I mean, come on. I wasn’t born yesterday.

Speaking as a former financial services industry professional, and one from the fairly down-to-earth tech scene in London no less, every time I see something like this, this is what I read:

Here’s the full clip of Cartman’s pitch/keynote/TED talk/etc. This episode of Silicon Valley is also instructive.

Truth is, though, when you drop the messianic/political stuff, Bitcoin is easy.

That’s all it is. It’s a phenomenally interesting bit of software, and one that tells us where P2P transactions are going. But it is not the end-all be-all of human existence. It’s not magic. It’s a tool.

Why blow it out of proportion and employ meaningless, futurist langue de bois when explaining this technology – the use of which reveals more about the speaker than the tech – instead of just speaking in plain English?

3) “Open-source” means “stop treating your users like shit by selling them worthless crypto-tokens. Start trying to help them solve real problems on their own instead”

By this I mean the practice of prefabricating a “coin” and selling that “coin” to fund development.

What’s a “coin?” For those of us who look at Bitcoin as a database, a “coin” is an (ostensibly scarce) entry on a (usually nonexistent) database that (once that database exists) can be very easily cloned (in seconds, with one command).

Almost every “2.0” project does this (we don’t, and never will). This practice more likely than not contravenes securities laws, is a terrible deal for the people who participate, and should stop. Today, now.

A great deal of development effort over the past two years was predicated on the assumption that coin-driven models were the only way forward as it was not thought, during that time, a blockchain database could be practically used without a token reward-driven security model. As it turns out, this assumption is wrong.

The lesson? We should always be critical: both of the technology itself (Bitcoin is simply not ready for prime time by any measure) and of our own assumptions.

This means stripping away hyperbole and speaking about technology in terms that people can understand, so we can use it to solve problems they actually have, instead of telling them that they should look at the world in the same way we do. The advantage of this approach is that we’ll actually build things people want to use:

I like the idea of being able to reverse charges if my bank account is ever compromised, personally.

So, going forward, my strategy is to to un-confuse all the people the crypto evangelists have spent the last two years confusing. 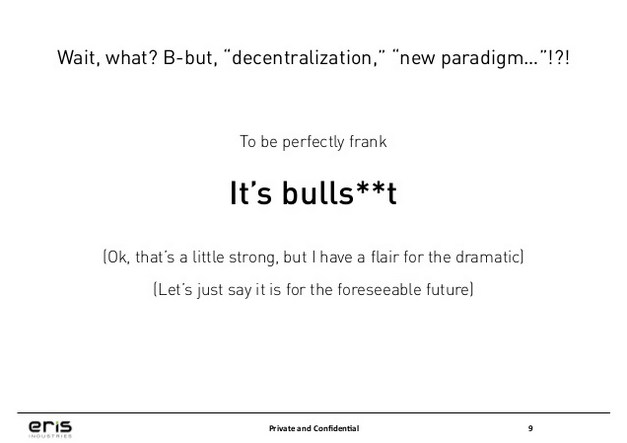 …as presented at the KPMG eSummit in Gibraltar yesterday. Check out the rest of the deck.

Unsurprisingly, anyone with a software development background gets what we’re saying more or less immediately. It’s not a popular view, but it’s one

Why be uncompromising, instead of being a cuddly, friendly little marmot? Well, lately the SV Bitcoin set has decided to spend a bit more time in London and elsewhere in Europe to tell us what’s what in high finance.

This is a very bad idea, on several levels.

I should qualify what I’m about to say by pointing out that there are plenty of reasonable and realistic entrepreneurs in London already, who have to date run good businesses focused on Bitcoin – consider either of the excellent CoinJar or Elliptic teams (for whom I have a lot of time).

The tourists? Not so much. These chaps fly over to London and mislead their audiences as to their technology’s commercial relevance, or try to sell a room full of Brits on “sound money” doctrine of a particularly obscure and anti-intellectual strand of American libertarianism.

They explain to seasoned professionals why we know nothing about what we do. And to top it all off, at some point there’s usually the implicit or explicit message that we should buy whatever cryptocurrency token they’re selling – in exchange for Bitcoin, of course, if not Bitcoin itself –  because it’s the future and we’d better get in, now, before it’s too late or the price goes up.

To rehash, these “coins” are

5) Overselling the benefits of Bitcoin et al. does nobody any favours, least of all the people doing the overselling

Overstating the benefits of digital currency or referring to it in magical or religious terms might get you a tony speaking slot at a conference, but it does nobody working in the distributed consensus business any favours. Instead, it:

(requires) skills drawn from diverse and incompatible, or at least, unfriendly, disciplines. Caught between Central Banking and Cryptography, or between accountants and programmers, there is a grave danger that efforts to construct Financial Cryptography systems will simplify or omit critical disciplines.

This isn’t the Internet. When in FinTech, you can’t ignore the “Fin.” If the tools don’t match the use-case, they’re the wrong tools.

6) Not in Kansas anymore

Europe is ancient. And London’s my town. Skeptical scrutiny, not naive optimism, is the norm here.

Europe is full of capable people who know what they’re doing, though they might carry on without the swagger or brashness of America (where I was born) – Europeans are a people to whom the term “disruption” is less a mantra than it is a crappy approximation of six pages of Schumpeter. Reading a few chapters of Carlota Perez’s work is a good start for those who want to dig deeper, but it’s no substitute for starting with Carl Menger, Eugen Böhm-Bawerk and Karl Marx (all Europeans) and working your way forward, book by book, chapter-by-chapter, idea-by-idea, through 200 years of crisis, revolution and war.

And there’s really no substitute for actually working at the coalface in the City of London, as many of London’s FinTech entrepreneurs have (myself included).

Keep the pop libertarianism in America where it belongs. This isn’t digital currency’s turf.

This is blockchain country.

View all posts by prestonbyrne

5 thoughts on “This is Blockchain Country”