Disclaimer: English lawyer, not practising this year, yes in England “practise” is spelled with an “S” when used as a verb, ergo I’m not your lawyer and this blog post is not legal advice.

UPDATE, 27 APRIL 2018: @hasufl has written a follow-up to this post exploring the Ether pre-sale distribution’s dataset in more detail. I highly recommend reading it.

I am often asked, directly, whether I think this coin or that one is a security (and thus required to be registered with the SEC before being offered to the public) or not. Virtually every time I demur.

Part of the reason for this is that although I am a securitization lawyer by training, I am not, as yet, U.S. qualified and the Howey test is a U.S. question. Most of the reason for this is that the question of whether a thing is or is not a security is a highly fact-dependent and, sitting from my perch on the East Coast and not in the offices of the issuers of these coins, I am in a very bad position to ascertain what is going on behind a company’s closed doors, what’s in their private correspondence and what intentions lay behind their issuances.

As I said to Marc Hochstein, Coindesk’s editor in chief, this morning when asked me that very question about Ripple and Ether,

I think that neither Ethereum’s promoters nor Ripple Labs’ promoters have satisfactorily answered that question to date, and that it is their job rather than mine to do so. Let me just say that if I were starting a software company in the United States today, given the noises being made by the SEC and by other financial services regulators I would not put an exchange-tradable token at the center of the offering unless that token were a representation of a legally-recognized interest and structured on the basis that the token will be regulated by the securities laws.

Whether Ether and/or Ripple are in fact investment contracts under the SEC v. W.J. Howey test is now an issue of public concern, with financial services culture hero Gary Gensler arguing that Ether might be classed as a security (properly, an “investment contract”), and Coin Center’s Peter van Valkenburgh arguing that it shouldn’t because a sufficient degree of “decentralization” should exempt a cryptocurrency from regulation.

Suffice it to say, in what will not come as a surprise to many of you, I tend to agree with Gensler as to the U.S. position. Law is, of course, a local phenomenon; thus when it comes to England and Wales, my home jurisdiction, I do not think Ether tokens as they exist today should be classified as a security, as I set out in more detail here.

But talking about law is boring. Talking about decentralization is exciting, hip and fun. For this reason, rather than quote chapter and verse on the Howey test, I am going to talk about the “Decentralization Defence” that we’re hearing cryptocurrency advocates wheel out in response to Gensler’s comments.

Peter’s Coin Center piece argues Ether is not a security because it has successfully managed to out-decentralize other cryptocurrencies:

But today, the value of ether and the functionality of the Ethereum network is not reliant on the Foundation, rather it flows from the efforts of thousands of unaffiliated developers, miners, and users. That decentralization is hard to differentiate from Bitcoin’s, a cryptocurrency Gensler suggested is almost certainly not a security for the very reason we’re discussing: no discernable third party (no common enterprise) upon whom we rely for any expectation of profits.

I’m going to disagree with that, on three points.

A common enterprise can be established horizontally, i.e. when investors have shared interests in a common fund. The authorities may need to stretch existing precedent if they wish to argue that a headless Nakamoto Scheme is capable of forming such an enterprise. Whether law enforcement intervenes and how will be fact-dependent. I can think of a number of different theories they could use but they do not bear repeating here.

Github is also a very obvious central point of failure for the purposes of the decentralization analysis. There’s a main repo. Who controls it and how is relevant.

Yes, Bitcoin has a repo, too, and I don’t think Bitcoin is an investment contract. But the background facts for Bitcoin are quite a bit different than those for Eth (and in my view having a Github repo with admins, in every case, would be a factor weighing in favour of a finding of commonality / weighing against a finding of decentralization).

Here we are not looking at the obvious concerns around the presale, its terms and its legality. We are asking whether the pre-sale was actually a decentralized exercise, with decentralized results, that would militate against a finding of horizontal or vertical commonality.

Despite Coin Center’s protestations to the contrary, the fact is that nobody actually knows how decentralized the world’s supply of Ether is. The ecosystem feels and looks decentralized, in that no single person or group has claimed or has appeared to exercise dominion over it. But that doesn’t mean such a person or group doesn’t exist.

In my view, most of the Ether sold in the 2014 token pre-sale in exchange for Bitcoin may have been paid out to one person or, more likely, a handful of close associates working in concert. My reasons for believing this are anecdotal, but based mainly in this chart which shows the inflow of BTC to the Ethereum wallet address during the Ethereum pre-sale: 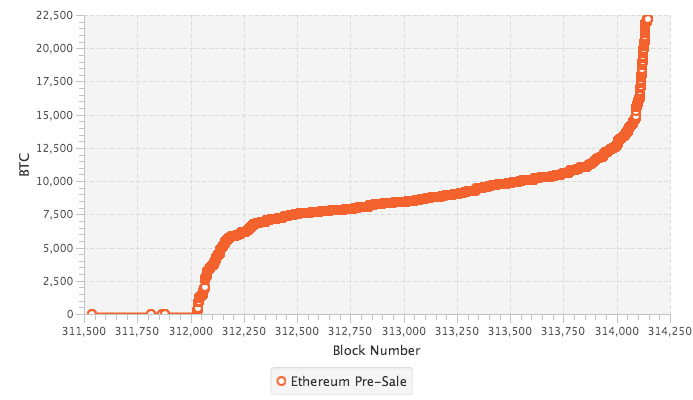 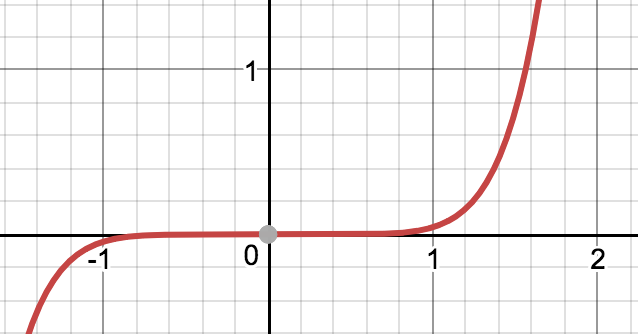 Now compare it to a random Kickstarter…

…Or the Tezos raise, which was 30 times the size of the Ethereum raise with what we should expect are many, many more contributors, thus offering an ostensibly much larger sample size: 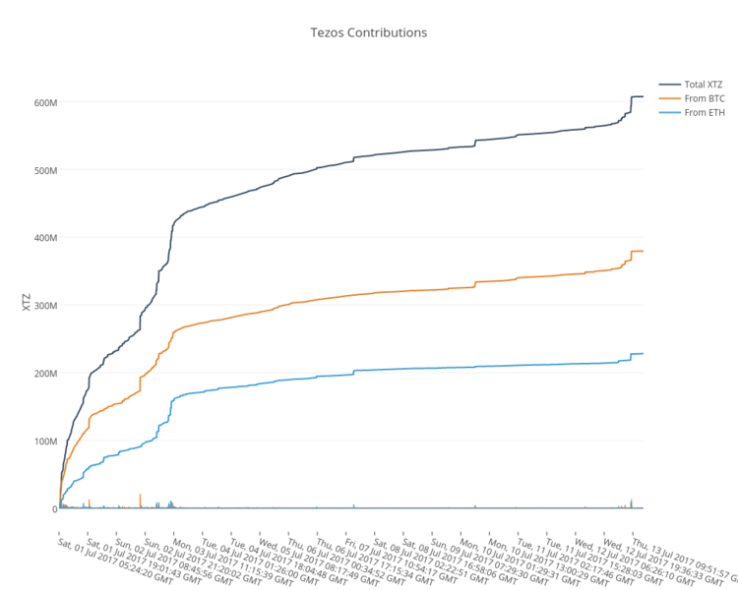 I could grab plenty more ICO fundraise charts but hopefully by now you’ve caught my drift: while ICO raises are sort of similar in that we usually see an initial rush of investors that gradually tapers off, with a little boost just before the sale ends, the initial two week-period of the Ethereum pre-sale looks more than merely typical, there’s very little randomness in it – it looks perfect. Seeing as human beings are generally imperfect, that’s what makes it a worthy candidate for forensic analysis. “Donations” from Eth-heads around the world not only flowed into the Ethereum Project’s wallet in great quantities, but they flowed in with the mathematical precision of a power function, 24 hours a day, 7 days a week, for two weeks straight. Notable too is the fact that ICOs tend to front-load contributions into the first days of the raise; Ethereum, by contrast, seemed to save the bulk of the contributions for later on.

My preliminary conclusion is that human beings engaged in financial speculation do not usually behave in the manner the Ethereum chart appears to show. This is especially true when we consider that the Ethereum community was as small as it was back in 2014. If someone wants to science the daylights out of this and show how unlikely, given what we see with other ICOs, it is that the Ethereum pre-sale curve is the result of natural, random market conduct, by all means. The data’s all there on the blockchain.

I’m thinking that, unless Vitalik subtly managed to telepathically hack everyone’s brains so buyers would participate in the pre-sale in an organized fashion, it would appear that a lot of Ether – enough Ether to move markets or, if the system migrates to proof-of-stake, enough to play a meaningful role in determining consensus on a block-by-block basis – was sold to not a lot of people. Depending on what those people then did (marketing? Other promotion?) this may be relevant for showing a common enterprise through vertical commonality, which is a lot easier to demonstrate than horizontal commonality. If the degree of influence is so significant that those holders can call the shots on consensus or market movements, well, that’s pretty significant for a securities analysis.

Summing up, unless we can show that this Ether has been sold into the wider market, this chart lends itself to the proposition that Ethereum is not as decentralized as we might hope. If true, this fact likely has legal consequences and rather undermines the “Decentralisation Defence” being put to the regulators by industry lobbyists.

View all posts by prestonbyrne

13 thoughts on “Whether Ether is a security”